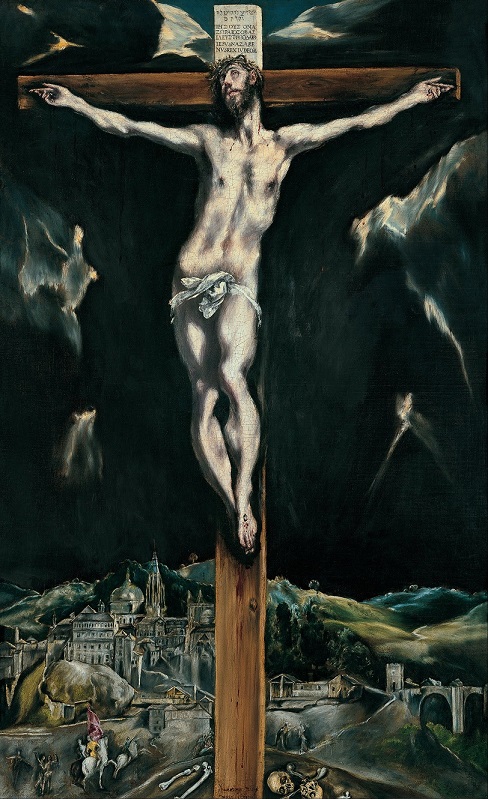 Haystacks / Wheatstacks
0 out of 5

It depicts Christ on the cross accompanied by the Virgin Mary, Saint John and Mary Magdalene at the foot of the cross. Three angels collect the Saviors blood at the moment of his expiration.
It shows how El Greco uses the colors of the sky to evoke emotion and mood from the scene without having to paint a physically tortured body.
El Grecos El Crucifixion is among one of the best artworks ever made using the theme; the other two of which are Giottos of the Arena Chapel and Grunewalds of the Isenheim Altar.

More About The Crucifixion

El Greco is considered by many as “mad with genius” who was not only sane but also full of intellect, which was greatly depicted in his works of art.

El Crucifixion, which was done in 1594, depicts a widely used form of punishment back in the Roman times. The painting shows Christ nailed on the cross and with a sign at the top to state the nature of a man’s offense. In Christ’s case, the sign read “Jesus of Nazareth, King of Jews” written in Greek, Hebrew and Latin.

El Greco made use of light and color to bring about an intense dramatic mood into the painting. The night scene, which makes use of highly contrasting colors, is believed to have come from the New Testament’s description of the event which says: “God made it as night when Christ was crucified.” (Luke 23:44) The painting also makes use of various symbols to depict spiritual emotions such as in the angels’ outstretched arms and the other angel at the foot of the cross.

El Greco’s El Crucifixion is among one of the best artworks ever made using the theme; the other two of which are Giotto’s of the Arena Chapel and Grunewald’s of the Isenheim Altar.

El Crucifixion is currently on display at the Museo Nacional del Prado in Spain.