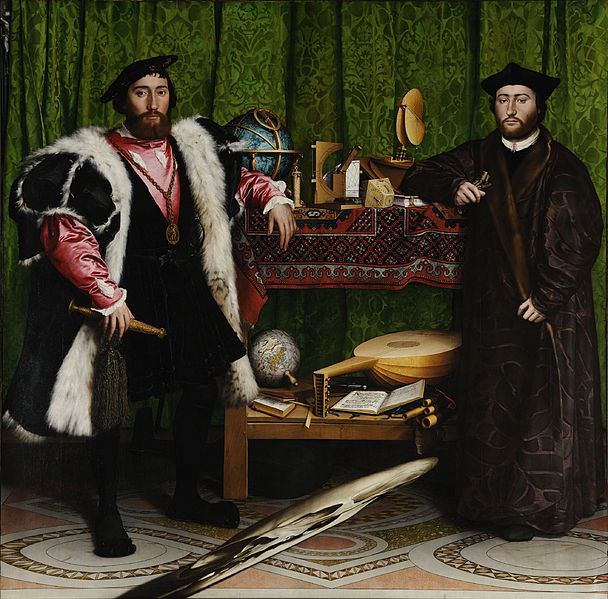 Beethoven Frieze
0 out of 5

If you love Northern Renaissance style art pieces, The Ambassadors is a great piece to have in your collection.
This is also a great conversation piece because there are numerous symbolic objects worth deciphering within the painting.
In pop culture, this panting appeared a few times: in the 5th episode of Hunted the painting was commissioned by British merchants; in Green Day’s album ‘Insomniac’, the artwork has the same image of the anamorphic skull; in the film Calvary (2014), one of the characters urinates on the painting

More about the “The Ambassadors”

The Ambassadors is famous because of the anamorphic skull in the foreground. However, the painting was made to memorialize its human subjects, namely Jean de Dinteville, French ambassador to England and his friend Georges de Selve, Bishop of Lavaur.

Holbein painted The Ambassadors in a time when there were rivalries between the Kings of France and England, the Pope, and the Roman Emperor. The French church was also torn over the question of the Reformation.

Political and religious discord was symbolically reflected in the details of this painting. One of which is the half-obscured crucifix behind a green curtain (behind the French ambassador), symbolizing division of the church. The lute’s broken string suggests ecclesiastical disharmony during the Reformation. And the anamorphic skull is perhaps intended as a reminder of mortality, but is quite unclear why the artist prominently used it in his works.

The complicated use of books and scientific instruments suggest that the artist intended to represent contradictions during the time he painted the artwork.

The painting is part of the National Gallery, London’s collection.

You can visit this page to know more information about this painting.