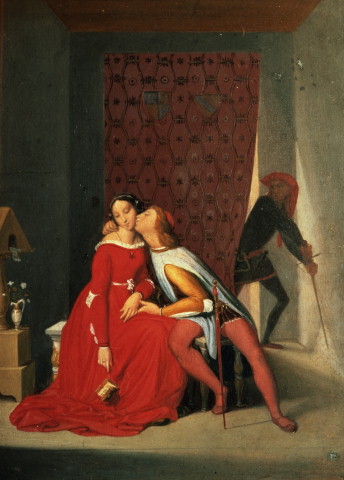 – J.A.D. Ingres was known for his portraits but he regarded himself as a painter of history. At that time, history painting was the highest goal in academic art.
– The story of Gianciotto, Francesca and Paolo has inspired several paintings and has also been adapted for the theatre and opera.

More About Gianciotto Discovers Paolo and Francesca
The subjects of this work by Ingres were historical figures in the 13th century. Francesca da Rimini was married to Giovanni Malatesta, also known as Gianciotto. Francesca had an affair with Gianciotto’s brother Paolo for about ten years until Gianciotto found out about the two and murdered them both. Their story was immortalized in Dante’s Divine Comedy where Dante puts Francesca and Paolo in the second circle of hell and Gianciotto in the ninth circle. Ingres’ troubador style painting presents an idealized rendition of the story. The painting is currently at the Musée Bonnat in Bayonne, France.