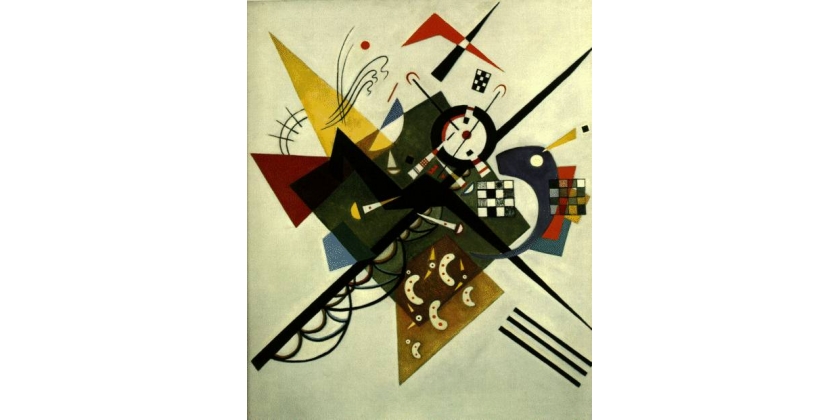 The life of the abstract pioneer Wassily Kandinsky

Wassily Kandinsky was a Russian painter who is widely recognized as one of the pioneers of abstract modern art. As an art theorist, he believed that artists can express themselves in their works without being representational. He produced numerous paintings with a torrent of swirling colors, tangling lines and geometric shapes, leaving the observer with a completely subjective experience. His work and his theories about art played an influential role in the development of modern art movements such as Abstract Expressionism and Neo-Expressionism.

Early Life and Studies
Wassily was born on December 16, 1866 in Moscow to Lidia Ticheeva and Vasily Silvestrovich Kandinsky. In 1871 the family moved to Odessa where his father ran a tea factory. Wassily attended a classical school and learned to play the piano and the cello. He also took private drawing classes although he did not start painting until he turned 30. He enrolled at the University of Moscow in 1886 to study law, ethnography and economics. In 1889 he went on an ethnographic mission to the province of Vologda where he took an interest to the garish, nonrealistic styles of Russian folk painting. In 1893 he became a Docent at the university law faculty and taught law and economics. He gave up his teaching career in 1896 to pursue his interest in art. He attended the art school of Anton Azbe in Munich for two years and later studied under Franz von Stuck at the Academy of Fine Arts.

Artistic Career
At Azbe’s school Kandinsky met Alexei Jawlensky who introduced him to the avant-garde in Munich. Kandinsky and three other young artists founded the artistic group Phalanx which opposed the conservative views of traditional art institutions. Aside from the Phalanx, Kandinsky exhibited with other groups in non-academic shows. He exhibited with the Berlin Sezession group in the Paris Salon d’Automne and Salon des Independents and with the Dresden Group known as Die Brucke (The Bridge). He had his first one-man show in Moscow in 1903, followed by two others in Poland. Most of his early paintings were landscapes and did not contain human figures. Sunday (Old Russian), Riding Couple and his breakthrough work, The Blue Rider were a few of the exceptions.

From 1903 to 1909 Kandinsky traveled to Europe and North Africa with the German painter Gabriela Munter, who had been his mistress since 1902. They moved to the small town of Murnau in Southern Bavaria in 1909. Kandinsky divided his time between Murnau and Munich. At this time he had already began exploring pure abstract painting. Kandinsky also co-founded the New Group of Artists, Munich and became its president. Kandinsky also participated in the exhibition of the “Jack of Diamonds” art group. His works became more and abstracted and he began titling them as Improvisation, Composition or Impression to distance them from the objective world. In 1911 Kandinsky co-founded The Blue Rider (Der Blaue Reiter) due to disagreements with the New Group of Artists. The Blue Rider held two exhibits and released an almanac. The group planned more exhibits but they were thwarted by the outbreak of World War I in 1914.

Kandinsky wrote a treatise called On Spiritual Art in defense of abstract art and to promote it as an art form that is capable of reaching a level of spirituality. Interest in Kandinsky grew when the British novelist Michael Sadleir published an English translation of the treatise in 1914. Kandinsky’s works first entered the United Kingdom when Sadleir and his father acquired several prints and the abstract painting, Fragment for Composition VII. Kandinsky returned to Russia that same year and settled in Moscow. In 1918 he became a professor at the Moscow Academy of Fine Arts and a member of the arts section of the People’s Commissariat for Public Instruction. He didn’t produce much during this period as he devoted his time to artistic teaching and collaborating with museums in Moscow. He created the Institute of Artistic Culture and became the director of the Moscow Museum for Pictorial Culture in 1919. In 1920 he became a professor at the University of Moscow and he founded the Russian Academy of Artistic Sciences the following year.

By 1921 the Soviet government was veering toward Social Realism and Kandinsky’s works were being criticized by his colleagues unceasingly. This prompted him to leave Moscow for Berlin in December of that year. In 1922 he was offered a teaching post at the Bauhaus of Weimar by the founder, Walter Gropius. Kandinsky taught basic design for beginners and a course on advanced theory. He published his second theoretical book, Point and Line to Plane, in 1926. The Bauhaus left Weimar and moved to Dessau in 1925 and moved again to Berlin in 1932. When the Nazis finally closed the school in 1933, Kandinsky left Germany and settled in Paris. The last piece he produced in Germany was Development in Brown which probably alludes to the uniform of the Nazi storm troopers who regarded his art as “degenerate”.

Kandinsky set up his studio at his apartment in Paris. He experimented with biomorphic forms which were more organic and softer compared to the harsh geometric shapes of his Bauhaus paintings. He referred to his works during this period as “concrete art” rather than abstract. His output during this period was low as Cubism and Surrealism were preferred by the Parisian avant-garde at that time.

Influences
Wassily was heavily influenced by theosophy, particularly the works of Madame Blavatsky. His books Concerning the Spiritual in Art and Point and Line to Plane discusses the tenets of theosophy. After acquiring a copy of Thought-Forms by Annie Besant and Charles Webster Leadbeater, he joined the Theosophical Society in 1909. Having a fervent belief in Orthodox Christianity, he incorporates theosophy and Christian eschatology in his first seven Compositions.

Richard Wagner’s Lohengrin also had quite an impact on Kandinsky. Being a musician himself, Kandinsky viewed music as the most transcendent form of non-objective art. He believed that musicians can evoke images in listener’s minds merely with sounds. He strove to produce object-free images that alluded to sounds and emotions through a unity of sensation.

Personal Life
Wassily married his cousin Anna Chimyakina six years after he graduated as a law student from the University of Moscow in 1892. He divorced Anna in 1903 when he met the young German artist Gabriela Munter. In 1916, Kandinsky left Gabriela for Nina Anreevskaya, a daughter of a Russian general. They got married in February 1917 and settled down in Moscow. He was past 50 by that time and Nina was much younger but the marriage turned out to be successful. Kandinsky died of a cerebrovascular disease in Neuilly-sur-Seine, France, on December 13, 1944.

Legacy
Kandinsky’s paintings and theoretical work laid the foundation for much of the expressive modern art produced in the 20th century. Although he cannot be considered as the founder of non-figurative painting, he can surely be remembered as a pioneer of first importance.

The Nazis confiscated 57 of his works in 1937 but his works were avidly collected by American patrons. One notable collector of his works was Solomon R. Guggenheim who opened a museum dedicated to avant-garde art displaying over 150 of Kandinsky’s works. His paintings fetch high prices when they enter the art market. In 1990 Sotheby’s sold Fugue for $20.9 million. In 2012 Study for Improvisation 8 was sold for $23 million at a Christie’s auction.

Note: See our Wassily Kandinsky collection, or see a larger collection at our sister site.