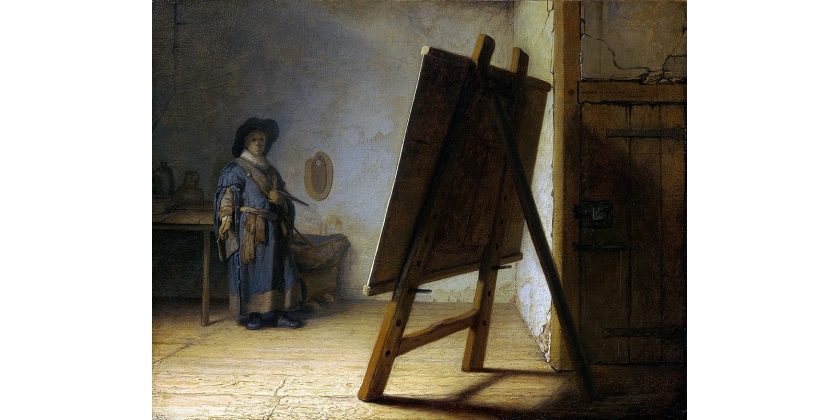 Biography of one of the greatest Old Masters…Rembrandt.

Rembrandt Harmenszoon van Rijn, 15 July 1606 – 4 October 1669
Rembrandt was a Dutch painter who is known for his numerous biblical scenes and self-portraits. He is often referred to as the “painter of light” for his mastery of the technique known as chiaroscuro – the manipulation of light and shadow. He was the leading painter in the Netherlands during his time and considered as one of Europe’s greatest artists today.

Early Life and Studies
Rembrandt Harmenszoon van Rijn was born in Leiden, Netherlands on July 15, 1606. His father, Harmen Gerritszoon van Rijn, was a miller, while his mother Neeltgen Willemsdochter van Zuitjbrouck came from a family of bakers. Rembrandt attended Latin school as a boy, and later enrolled at the University of Leiden at the age of 14.

However, he did not continue with his academic studies, instead pursuing his love of art. He spent 3 years as an apprentice to Jacob van Swanenburgh, an artist known for his architectural pieces and scenes of hell. Rembrandt then moved to Amsterdam to study for six months under Pieter Lastman and then Jacob Pynas before he opened his own studio in Leiden around 1624-25.

Artistic Career
Rembrandt shared his studio in Leiden with his friend Jan Lievens, a former child prodigy and already established painter when he met Rembrandt. They both wanted to become the leading painters of historical scenes. By 1627, Rembrandt, aged 22, was already accepting students. He charged an annual fee of 100 guilders. One of his students was Gerrit Dou who became known for his genre scenes. Rembrandt produced his first etchings around 1628. His other works during this period were Repentant Judas Returning the Pieces of Silver, The Artist in His Studio and Peter and Paul Disputing. In 1629, Constantijn Huygens, the father of the Dutch scientist Christiaan Huygens, became one of Rembrandt’s patrons. Through this connection, Prince Frederik Hendrik became his patron as well.

At the end of 1631 Rembrandt moved to Amsterdam permanently and began practicing as a professional portraitist, basing himself in the workshop of the art dealer Hendrick Uylenburgh. One of the more notable paintings produced in this period was The Anatomy Lesson of Dr. Nicolaes Tulp. The influence of other artists is evident, with Descent from the Cross often compared with the work of the same subject made by Peter Paul Rubens. The composition of Wedding of Samson recalls Leonardo Da Vinci’s The Last Supper.

Descent from the Cross, 1634 by Rembrandt

Rembrandt and his wife Saskia left Uylenburgh’s workshop in 1635 and rented a house in Nieuwe Doelenstraat. They bought their own house at the newly built Breestraat in 1939. By 1640, Rembrandt’s fame had spread throughout the Netherlands.

In 1642, he was commissioned to paint a group portrait of Captain Banning Cocq and the seventeen members of the civic militia guards known as the Kloveniers. This painting was titled Militia Company of District II under the Command of Captain Frans Banninck Cocq but it is now commonly known as The Night Watch, one of his most beloved works of art.

His output after that was diminished and became varied in size, subject and style. He did not paint any portraits between 1643 and 1652 but did do an etching of his friend Jan Six. Rembrandt also changed his method of portraying light. In his work Holy Family With Angels, he paints three light sources and makes use of strong colors.

Despite his sparse output, Rembrandt’s reputation as a great artist still persisted. He sold several paintings to Don Antonio Ruffio from Messina, Sicily. One of the works Ruffio bought was Aristotle with a Bust of Homer. However, Rembrandt’s income and fame did nothing to solve his financial problems and he went bankrupt in 1656. He sold his house in 1658 and signed an employment contract with his son Titus and mistress Henrickje to protect them from his creditors, and enable him to continue working as an artist.

He still received several commissions for portraits, including one for the newly built city hall, but the finished work, The Conspiracy of Claudius Civilis, was rejected. In 1662, he painted the group portrait of officials the Amsterdam Drapers’ Guild. That same year, he took on his last apprentice, Aert de Gelder. In 1667, he was visited by Cosimo de’ Medici who referred to him as “pittore famoso” (“famous painter”).

The Conspiracy of Claudius Civilis (fragment), 1661-62

Personal Life
While Rembrandt’s work reveals his deep Christian faith he was not a member of any sect or congregation. His mother was a Roman Catholic while his father belonged to the Dutch Reformed Church. He married his wife Saskia in the local church of St. Annaparochie. His five children, including his daughter from his mistress, were christened in the Dutch Reformed churches in Amsterdam.

His wife Saskia was the daughter of a lawyer and former mayor of Leeuwarden. Three of their children died shortly after birth. The only child who survived to adulthood was Titus who was named after Saskia’s sister, Titia. Saskia died after he was born at the age of 29. In her will, she allowed Rembrandt to use their son’s inheritance as long as he did not remarry. Rembrandt hired a wet nurse to take care of Titus when Saskia was ill. The nurse, Geertje Dircx, became Rembrandt’s lover. She expected Rembrandt to marry her and charged Rembrandt with a breach of promise when Rembrandt broke up with her. She was awarded alimony of 200 guilders a year. Rembrandt had her committed for twelve years to an asylum when she pawned jewelry that had once belonged to Saskia.

Rembrandt had another relationship with his maid Henrickje Stoffels in the late 1640s, with whom he had a daughter named Cornelia. In 1654 Henrickje was summoned by the Reformed Church to answer the charge “that she had committed the acts of a whore with Rembrandt the painter”. Rembrandt was not summoned because he was not a member of the church but Hendrickje was banned from receiving communion.

Rembrandt built up a personal collection of exotic objects which may have contributed to his bankruptcy. He collected natural objects such as shells and corals as well as man-made objects like medals, busts of Greek philosophers and Roman emperors, Japanese armor, weapons, and exotic musical instruments. He also collected paintings and prints by other artists. His collection had to be auctioned in 1656 to pay off his creditors. He was also forced to sell his house and move to a more modest accomodation in Rozengracht. In 1660, Hendrickje and Titus opened an art shop where they sold Rembrandt’s paintings. Rembrandt signed a contract with them as their employee.

Hendrickje died when the plague hit Amsterdam in 1663. Rembrandt’s son Titus died in 1668 at the age of 27, leaving a baby daughter. Rembrandt himself died a year later on October 4, 1669 at the age of 63. He was buried in an unknown grave in the Westerkerk.

Portrait of an Elderly Woman in a White Bonnet, 1640

Rembrandt’s works are displayed in major museums all over the world. The Rijksmuseum holds the most significant collection including The Night Watch and The Jewish Bride. Other museums include The Hermitage Museum in St. Petersburg, The Mauritshuis in The Hague, the National Gallery in London, Gemaldegalerie in Berlin, Gemaldegalerie Alte Meister in Dresden, The Louvre, Nationalmuseum Stockholm, Schloss Wilhelmshohe in Kassel, the Metropolitan Museum of Art and the Frick Collection in New York and the National Gallery of Art in Washington D.C.

Rembrandt’s former house in Jodenbreestraat, Amsterdam was converted to The Rembrandt House Museum. The museum contains several etchings and paintings by Rembrandt as well as works by his contemporaries. The museum had 193,250 visitors in 2012.