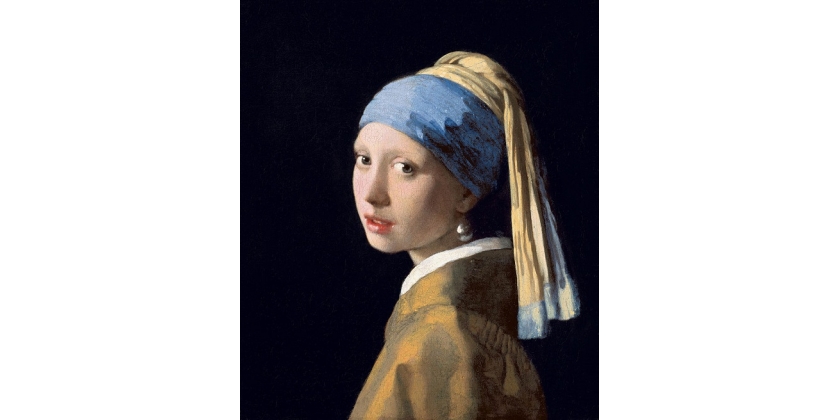 The story of the great Johannes Vermeer, and a selection of his works.

Johannes Vermeer (1632 – 1675)
Johannes Vermeer was a 17th century Dutch painter who was known for his extraordinary talent in rendering shadow and light. Little is known about his personal life and he produced relatively few paintings. After his death, he was forgotten and remained virtually unknown until his works were rediscovered in the 19th century. Today, he is considered as one of the greatest painters of the Dutch Golden Age.

Early Life and Artistic Studies
Johannes was the son of Reynier Jansz and Dignum Balthasars. He was baptized in the Reformed Church in Delft on October 31, 1632. His father was a silk worker who became an art dealer and an innkeeper. They lived in an inn which his father leased known as “The Flying Fox”. Reynier eventually bought a house called “Mechelen” in Delft in 1641.

Vermeer probably began the required six-year apprenticeship with a master painter around 1647. It is not known who taught him how to paint but he was accepted in the Delft artists’ guild in 1653. It has been speculated that he studied under Van Loo or Quellinus due to the similarities of Vermeer’s early works to theirs. Other painters that were proposed as his teacher include Carel Fabritius, Leonaert Bramer and the Catholic painter Abraham Blomaert. Vermeer’s style is similar to the Utrecht Carravagists whose works were included in the background of Vermeer’s paintings.

Artistic Career
Vermeer became a member of the Guild of Saint Luke on December 29, 1653. The guild records show that he was not able to pay the full admission fee of six guilders. He was only able to pay the remaining sum in 1656. His first known paintings were Christ in the House of Martha and Mary and Diana and Her Companions. Two other lost works attributed to him were The Visit to the Tomb and Jupiter and Venus and Mercury. The religious and mythological scenes were probably painted to suit to the tastes of the aristocratic court in The Hague. Vermeer’s first signed work was The Procuress which was painted in 1656.

Vermeer produced his earliest genre scenes in the late 1650s. Officer and Laughing Girl and Girl Reading a Letter by an Open Window were the first known examples of the pointille technique. This technique gives the painting a sense of brilliancy which is rarely seen in his other works. Vermeer was appointed as one of the headmen of the Guild of Saint Luke in 1660. Around 1661, Vermeer painted his largest canvas, The View of Delft. The piece is sometimes considered as the first true urban landscape in western art history. He was elected as the head of the guild in 1662. By this time, many of the artists in Delft had left for Amsterdam. At the age of 30, he was the youngest artist to become the headmaster of the guild since it was founded in 1611.

The luxury items that appear in Vermeer’s works such as the virginal in The Music Lesson were probably lent to him by clients. Vermeer probably did not work on a painting unless it was commissioned. When a French diplomat named Balthasar de Monconys visited him in 1663, Vermeer did not have any painting to show de Monconys. They had to go to a house of a baker who owned one of his works. Vermeer’s patron, Pieter van Ruijven, had been lending him money which might have been advance payment for future works. In his last will and testament Ruijven and his wife left 500 guilders to Vermeer.  At the time of his death in 1674, Ruijven owned twenty paintings by Vermeer.

The surface of Vermeer’s paintings in the 1660s were much smoother and less tactile. The lighting in his works such as Woman Holding a Balance were more diffused. This effect is similar to the images produced by a camera obscura, an optical device that operates like a box camera. Aside from The Procuress, The Astronomer and The Geographer were the only other dated paintings by Vermeer. Some scholars believe that the model for these works could be Antony van Leeuwenhoek, a scientist in Delft known for his work in optics.

In 1670 Vermeer was elected again as the head of the Guild of Saint Luke. Around the same period, he painted The Love Letter, showing an increasing stylization and technical refinement that is also evident in his later works. The economy and the art market collapsed after France invaded the Netherlands on April 29, 1672. Vermeer’s art dealing business was affected by the collapse. Vermeer’s low rate of production and restricted clientele aggravated his economic problems. Lady Standing at a Virginal and Lady Seated at a Virginal were among his last known works.

Personal Life
Much of what is known about Vermeer’s personal life is obtained from municipal records and business transactions. Little is known about the artist apart from his baptism and marriage. Vermeer, a Protestant, had to convert to Catholicism to marry the Catholic Catharina Bolnes. Vermeer’s mother-in-law, Maria Thins, refused to give her consent in writing but tolerated the marriage. The ceremony took place on April 20, 1653 in Schipluiden, a small village south of Delft. The couple probably lived with Vermeer’s family in the inn called “Mechelen.” They later moved in with Catharina’s mother at her house at Oude Langendijk where Vermeer painted his masterpieces. Catharina gave birth to 15 children, four of which were buried before being baptized.

Maria Thins provided considerable financial support to the artist. She empowered Vermeer to collect various debts and reinvest the money according to his will and discretion. In the first draft of her testament, Thins left a significant sum of 300 guilders to Vermeer and Catharina. She also left jewelry and 200 guilders to Vermeer’s daughters. In 1672 the land that she owned near Schoonhoven was flooded to prevent the French army from crossing the Dutch Water Line. This caused some financial difficulties for Thins. In 1675 she sent Vermeer on several business trips to Gouda and Amsterdam. In Amsterdam, Vermeer borrowed money by fraudulently using his mother-in-law’s name.

In December 1675, Vermeer died, leaving behind eleven children. According to his wife, his death was caused by “the great burden of his children, having no means of his own, he had lapsed into such decay and decadence, which he had so taken to heart that, as if he had fallen into a frenzy, in a day or day and a half had gone from being healthy to being dead.”. Vermeer was buried at the Protestant Old Church On December 15, 1675. His wife Catharina was left with an enormous debt. She was only able to survive with the help of her mother.

Legacy
Vermeer was a respected artist in Delft but his reputation did not spread outside of his hometown. Most of his paintings were bought by a local patron, Pieter van Ruijven, which reduced exposure of his works. After his death, many of his paintings were attributed to better-known artists such as Metsu or Mieris. His masterpieces were rediscovered in the 19th century when a German art director named Gustav Waagen saw The Art of Painting in the Czernin gallery in Vienna. At that time, the piece was attributed to Pieter de hooch.

Theophile Thore-Burger’s catalogue raisonne in 1866 drew more attention to Vermeer. The catalogue lists some 70 works although only 34 paintings are accepted as Vermeer’s. There were many speculations about his painting techniques. British artist David Hockney argued in his book Secret Knowledge: Rediscovering the Lost Techniques of the Old Masters that Vermeer used optics to achieve precise positioning in their compositions. Professor Philip Steadman proposed in his book Vermeer’s Camera: Uncovering the Truth behind the Masterpieces that Vermeer used a camera obscura to produce his paintings. His techniques remain a mystery due to the fact that there is no substantial evidence to support these theories. (Note: The excellent film “Tim’s Vermeer” – http://www.imdb.com/title/tt3089388/ – is the story of a non-artist emulating what he believed to be Vermeer’s techniques to recreate one of his works.)

Vermeer’s most famous work, Girl with a Pearl Earring, became the subject of a novel of the same name by Tracy Chevalier. The 1999 novel was adapted into a film in 2003 starring Scarlett Johanssen. The novel tells the fictional account of the creation of the famous painting and Vermeer’s relationship with the model. Other novels that include Vermeer’s work as part of the plot include Agatha Christie’s After the Funeral, Susan Vreeland’s Girl in Hyacinth Blue, Blue Balliett’s Chasing Vermeer and John Updike’s The Centaur.

Artists such as Simon Duiker, Wilhelm Hammershoi and Thomas Wilmer Dewing have been inspired by Vermeer. 20th century artist Salvador Dali painted his own version of The Lacemaker. The infamous forger Han van Meegeren was able to imitate the Dutch master’s style and sell his works as an authentic Vermeer. One of these forgeries ended up in the hands of Hermann Goring.

The Lacemaker, 1955 by Salvador Dali 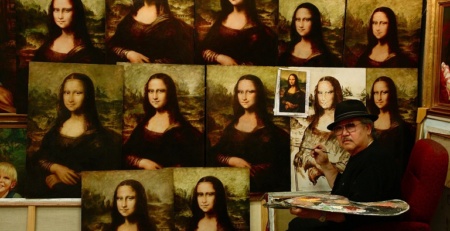